A friend of mine recently built a camper van with all the bells and whistles. This is his second build, so there is some experience already and he is a smart guy with an engineering background.

On a ski trip, while away from the van, there was an electrical fire and it got one of his dogs - almost the second as well. I don’t have the details of what exactly caused it or what may have been running at the time, but it was a really good reminder that these things can happen and when we mess with electrical systems and whatnot, there is a risk to it.

He is now without his dog and the van is ruined and stranded out of country. This was one of the first trips in this new van as well.

Be careful with wiring and electrical. Not a bad idea to seek expert opinions on things - I know many places that sell wiring and gadgets will give good advice for free.

I have all my back of house wiring coming off a breaker under the hood - and the second battery and kit are all manufactured by a company that only does this. I flip that breaker off when not camping - and now will never leave my dogs in the rig with that breaker turned on unless I am also in the truck.

Sorry for your friend’s loss. I understand the DIY crowd but certain things such as wiring electrical equipment requires professional level of knowledge. Yes it’s “low” voltage, but since most will be dealing with DC since most vehicles are DC, you will need to understand what you’re dealing with. It does not require much amps for something to melt or burn in a 12 volt system. I repair automotive electrical equipment for a living and have seen some craptastic jobs from vehicle outfitters and wonder how these vehicle’s are not on fire.

As a general rule of thumb, when wiring up circuits assuming you are using adequate wiring gauge, check the amperage draw of whatever it is you’re powering up and have the fuse rated up to 2x the operating current draw. IE a circuit that draws 5 amps should have a 10 amp fuse. That’s how most auto manufacturers engineer their current protections. ALSO use SAE fuses that use white letter markings indicating the fuse rated amperage.

This is a really sad story. Terrible.

This situation is exactly what I made a concerted effort to avoid. I know that I have no electrical knowledge, and I don’t want to risk it. Besides, for me, its important to stay light. All these electrical gadgets cost weight. I also worry about all the vibrations of off roading. Even competent electrical wiring run carefully through spaces not meant for wires can potentially succumb to vibrations. I think…
With my GFC, I stayed in my simple lane. More power to those with skills, as the electrical allows many comforts and advantages not possible in my “build”.
BUT, to all those adding lots of electrical, absolutely be careful.

Same here, kind of the reason I stuck with a goal zero 1000x to power all my needs, and just ran one cable to 2 solar panels on the roof to recharge it. I can unplug it and take it out if i wanted to.
Sorry for your friends loss, hope he gets home safely with his other pup.

Another protip: always do a shakedown run. I do this even for routine maintenance: take it for a test drive, be extra sensitive to noises, smells, anything that could be “off”. Run it harder, faster, longer than you intend to under normal conditions while you’re testing your work. This way you’re prepared for something to go wrong when it’s more likely to fail. This will help avoid being stranded far from home on your “maiden voyage”. As with anything, there is a level of “accepted risk”, these are just tips I’ve found work well to minimize that risk. Nothing will eliminate it. And I’m very sorry for your friend’s loss. Not only the grief but the guilt that I’m sure he’s going through. Please pass my condolences. I have absolutely no doubt that he did anything intentional, so hopefully he doesn’t beat himself up too much. Learn from the mistakes, make sure not to repeat them, and that’s all that you can do to honor his furry friend. And thank you for sharing this story, sobering reminders like this help everyone keep their guard up.

With each circuit I add, I include an appropriately rated fuse at the connection to the battery. If the wire routing is long, I’ll do a second fuse just ahead of the device at the far end.

Use a relay instead of a toggle switch for higher current loads. Marine rated battery fuses (MRBF) are a nice option for super high current loads (300 Amps on my winch connection). 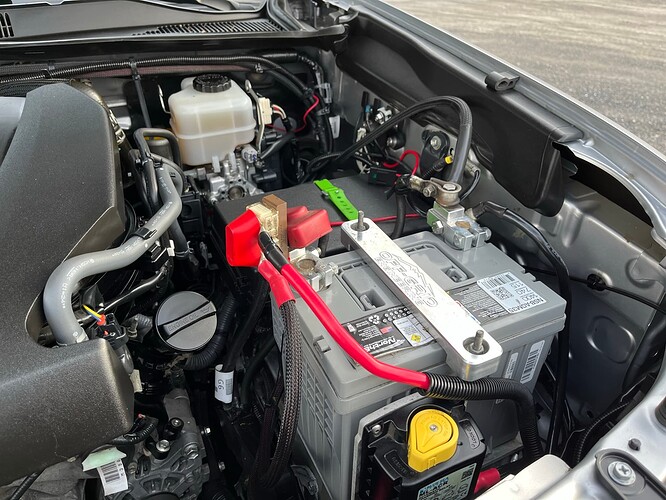 Did the fire burn the second dog’s tail?