So hear me out…

I want to “wrap” the entire inside of my tent ceiling with white velcro loop material with a clear adhesive… should preserve the light coming through as it does with the white ceiling to some extent, won’t snag on stuff because it’s the soft side of the velcro, provides a really modular mounting system for whatever I want to mount, should help prevent moisture from dripping down the ceiling when there is condensation, and most importantly lets me remove all the random strips of velcro I have already stuck up there for various specific mounting purposes.

My question is: Why shouldn’t I do this?

Nothing a little soft bristled hand broom couldn’t knock down periodically. What else?

Catching condensation might be a double edged sword if the material doesn’t also dry quickly. I’ve been thinking about a solution for ceiling storage, though, and really like this idea.

Should also mention I have a ceiling vent fan installed so even the wettest tent can be dried out in a few hours in the driveway (trust me, I just went through this the other weekend).

That said - the Leer canopy was always wet in the mornings on metal and glass and presumably the headliner was getting some moisture but never really had an issue in 5 years with it at all.

@WrinkledPants Roof caddy system sounds like a good modular storage system; but it doesn’t address the condensation issue. @the_philxx did your DIY insulation not take care of that?

Worked great in the winter! But I will not be insulating during the summer…

As for the storage caddy thing, yea - that’s pockets on the roof! I already have those that I got and might make a new one … Scott and I have discussed…but this is bigger picture. Even his system attaches with velcro last check.

Imagine… I somehow end up with a pocket projector and want to put a movie on the ceiling… I could just make a screen and slap some velcro on the back and toss it up wherever.

Imagine… I really want a way to have a beverage upstairs wihtout risk of knocking it over so I make a little dangling coozie.

Imagine… some straps with hook velcro that could quickly be tossed up to hold extra clothing or bedding out of the way really quickly.

Imagine… I already have like 20 pieces of velcro on the ceiling for the insulation, for the pockets, etc. Could just as easily have one and tidy it all up.

Anyways… I will probably do it because I am reckless and impatient, but I figured I would throw the idea out to anyone else who might be curious about this type of solution.

LOL love it! Reckless abandonment is how I roll!

Recklessness X3… Welcome to the club!

I built my own insulation as well and when I did it ran 1 inch Velcro around the entire outer edge… have had no issues… wish I had run 2 inch though. Yeah my current insulation is up there on 1" Velcro around the edge. What if it was 49.5" Velcro strip?

Hey Phil, I think the idea of a velcro ceiling in the tent is intriguing. The soft irregular surface of the velcro is an immediate, moisture management, improvement over the slick finish of the GFC ceiling. The ability to mount a variety of objects from the entire ceiling is pretty cool, too. If the velcro material you are considering is mold and mildew resistant that will be a plus. The velcro will be exposed to a lot of moisture.

Keep us posted. I’m looking forward to hearing more about your newest project!

where can you get velcro that wide? asking for a friend. Personally, I see no downside to it

Yes, the ceiling panel could be up there all the time but it’s not my plan to leave it in there (although I could I suppose). I kind of like having the light come through the roof so I’m trying to preserve some of that translucency… 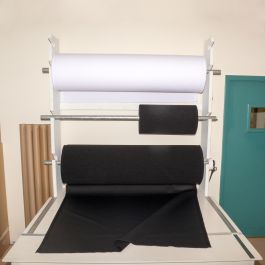 As far as my research has led me, looking for 3001 Velcro loop which is supposed to be fairly standard loop material. I haven’t touched this yet but the other style is apparently more like a felt product.

makes me want to cover a wall… + trampoline and sticky suit

I see no reason not to. Would be like that scene in “Blank Check”

I used to tell my wife that we should find a good harness and velcro the boys to the ceiling. The motion in my house when our boys were really young was mind-bending.

Velcro is an amazing product, the only limit to its use is ones imagination.

My wife never let me buy velcro back in the day and my boys, not suprisingly, grew up to be a lot like me.

I will do this sweet sweet mod (or make a mess trying) when I get back from Hawaii in a week.

I’m considering doing something similar but attach the hook side to the panel because one of the items I plan to stick to it will need the softer loop side. I might cut out various shapes / designs like bathtub no slip stickers.