I have both kinds of leaks. I also have a slightly sloped driveway and get a solid flow into the bed. It also happens while driving in the rain. I guess I need to put in tickets. 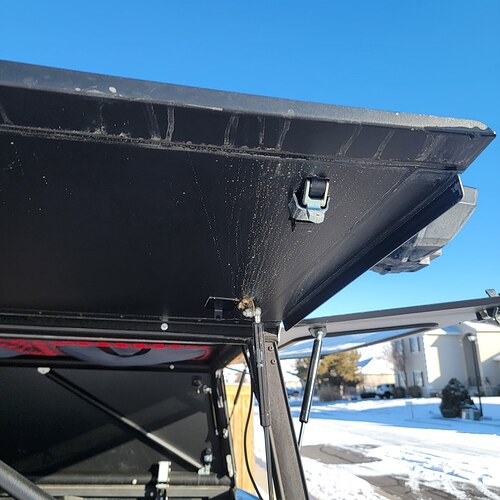 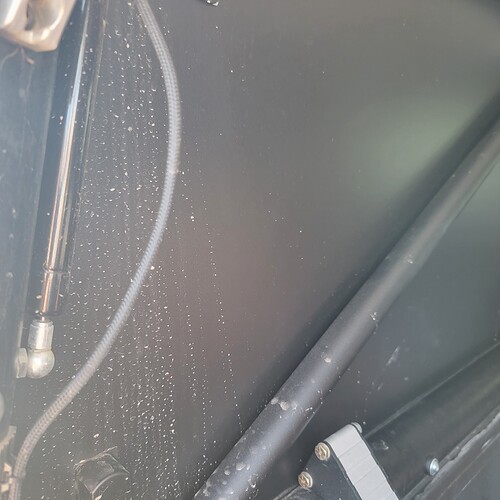 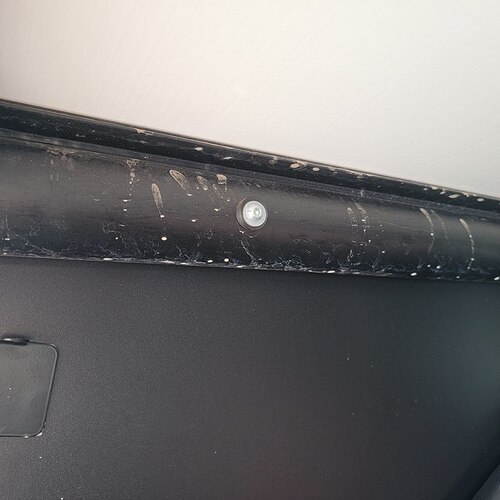 Another person here who has submitted a ticket (in my case the 2nd ticket for water intrusion) and I received the same recent comms from GFC. I’m encouraged with the response and rain testing, I’m also a little skeptical since right around a year ago we all heard this was sorted with the weatherization fixes.

So, thank you to GFC for being responsive and fingers crossed for the root cause to be identified and fixed.

V1’s don’t need the weather stripping, so you should be all set. If you’re experiencing any issues, hit us up.

Hey @Tyler-Kai i had another thought, have you Seam sealed/shoegoo to all 4 lower corners of the exterior portion of the tent yet? I did that almost immediately because I noticed about 1:4” - 1/8” gaps in almost all 4 corners. I never had any water in but this was done almost right after I got it and didn’t experience much water exposure yet. Just a thought. I saw that and noticed a potential problem.

I also noticed that the inside of my tent had the lower 4 corners sealed with a small bead of black sealant of some sort from the factory. Not sure if they started adding that or not at some point.

Just some more thoughts. I hope you can get this solved as a $5k tent should not leak.

I have not shoegoo’d anything on the tent at this point. I think that probably could help prevent water from finding its way past the fabric portion and into the sleeping area; however, I think there is a bigger issue in that the entire back portion of the tent is getting wet in the first place.

My guess from what I’ve tested on my own is that the rear, upper aluminum billet is a big culprit of my water intrusion. But I’m sure GFC will be able to get to the bottom of this with all their testing.

Got it. Good luck! It seems like you have a good grasp on a potential source. And yes I agree with you, the amount of work and resources GFC is putting in is promising. Hopefully a solution is reached soon.

smart idea on the dry packs and periodic opening. but cmon man sequim? you rainshadow homies get like 4" of rain a year

I’ve put a GFC in my cart like 10 times now, and this is the reason I never press submit. I hope it gets solved soon.

I’d still encourage you to do it. It’s so versatile and light compared to the competition. The customer support is fantastic and they will stand by it from my experience. I’ve had my RTT for 8 months now and I love it. I sleep in it about 2-3 times a week for work and I wouldn’t want another setup l. It’s rapid deployment and takedown is very smooth. That’s my two cents. :). Good luck making the decision.

Leaks and all I am really happy with my choice to get a GFC.

Noticed this today. Some white marks from water getting though looks like. Wondering if it’s some mildew? This is where the tent portion connects to the camper. Looks like there’s some gaps in the glue/black silicone they use. 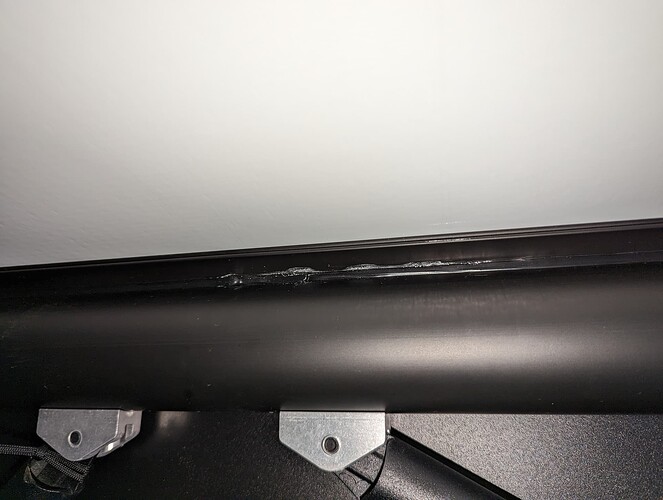 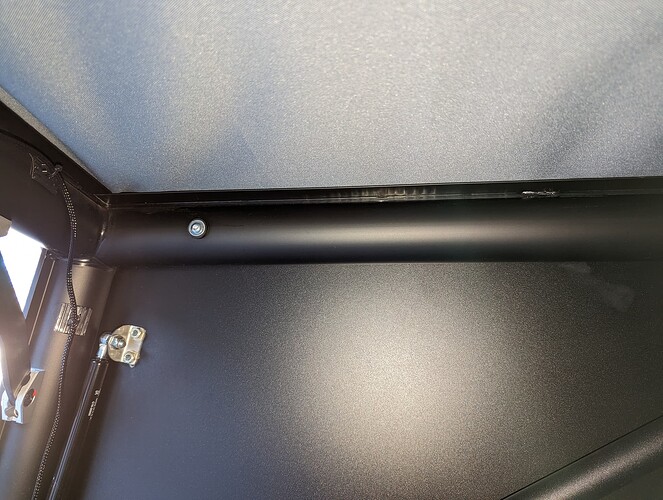 I get that. I run a small businesses, too - one of which involves manufacturing - and I’m big on customer support as well. But the product needs to do what it’s supposed to do, I think. And the #1 job of a tent, I’d say, is to keep water out.

I love that it’s fast and light, and I freakin’ love the price. My 2nd choice is an AluCabin mounted to a custom-built box on top of a flat bed (because the AluCabin won’t fit my truck, and I’m not changing trucks). That option will run me probably $50k by the time I’m done and weigh several hundred pounds more.

On top of that, I’m in NC. I don’t relish the idea of a 2nd trip to Montana to have issues fixed. I’d rather spend that time doing what I want to do with my truck.

I guess what I’m saying is I LOVE the idea of the GFC, but I don’t love the idea of getting wet. Looks like these guys are working on it; I hope they get if fixed soon. I’ve got a big trip coming up in August and I intend to have my new setup - whichever one it is - in place by then.

is it white powder looking stuff? it’s part of the glue. It usually happens when it’s smeared(or in this case compressed) while still wet after installing. my previous job was putting that glue in the tube

That’s exactly what it looks and feels like. I have not noticed it before so I’m pretty certain this is new. Can you share any more info? I take it that’s probably not a good thing…

I’m sure @blackhearse can give you more useful information, but I sealed my trailer build using an adhesive/sealant and have had similar looking areas show up. Even a year later new spots seem to show up and I am assuming it is just more uv/weather exposure over time. Everything is rock solid and it does not seem like an issue in the least.

I personally wouldn’t stress about it, but you could always submit a support ticket to keep a record of it in case something changes down the road.

Appreciate the response @jedgar seems pretty normal then, I’ll check next time it rains to see if it comes from the same area.

it takes a while to show up(mine has it too) and does not affect the performance of the sealant. the boxes and tubes are labeled with “do not tool or smear” because this happens. Next time you are in home improvement center check out the OSI Quad Max boxes. Basically you have 2 parts in the glue- resin and “filler”. the white is the filler coming out because isn’t encapsulated by the resin anymore

Damn. I read this whole thread and pains me to know how many have this water intrusion issue. And how many more who are not on this forum that we do not know of.
Hopefully GFC has a solution and can fix this problem. I still have an open ticket for my delaminating front windows on my tent since August 2022.

Haha! you’re right about Sequim, but if you know that town, its not where the truck spends the majority of its time. Thats why there are dry enough times in the winter to air the baby out.

Well Hell. Thought I was a lucky one … until today. Very small amount of rain over two days and the truck was parked slightly nose down. Turned the truck around to do some interior work and a friggin waterfall came inside from the immovable front panel on the driver’s side. I say waterfall as that’s exactly what it was, maybe a pint worth of water came in at a near steady stream. Still dripping slightly but it’s not enough to fall, just run into and down the forward tube support.

Doesn’t shake my view on GFC as a whole and I’ll do my own troubleshooting before asking for assistance … but damn. This was A LOT of water. Assumption is the frame filled up based on that parking angle then disposed when facing the opposite way. The troublesome part for me is where the water was coming from. No where was it visible where it was “stored”. Any thoughts?