I’ve always been an oddball when it comes to vehicles and apparently have an affinity for British things as I’ve owned 6 Minis and now I’ve added a new Defender 90.

I love old defenders too but wanted something more comfortable for some overlanding. Yes I know I bought a Land Rover and I’m fully aware of their reputation. No I don’t care. I spec’d this one to try and limit issues in the future.

Planning an expedition form the NYC area to Seattle to Alaska next year with some friends. Using the Frontline rack and just ordered a RTT today! I do wish I had access to some of the kit all the others have with their Yota’s and Jeeps but alas it is what it is. I’ll update as we make progress. Cool rig! I like the classic steelies and white roof!

Thanks! I’m a classic man myself. We can’t get the “Hard Top” here in the states which sucks but folks have made some progress with kitting out the back seats.

Sweet! I plan on meeting up with my buddy who lives there as well to head up. He’s preping his Ranger.

As a previous generation 1994 Defender 90 owner, I loved that rig and put it through it’s paces all over the west coast, up in to BC and Alaska. Wish I still had it, but I have my order in for one of the new Ineos Grenadiers.

First year models are 3L 6Cyl BMW petrol or a 3L 6Cyl BMW diesel motor. 2025 should see their hyrdogen base model on the streets. Are they shipping those to the States? That’s interesting. I’ve read that they are solid, but the timing for me was off, I needed something sooner as I had already waited a year for a new Badlands 2dr Bronco. Ford would simply not build it because of the quality of the roofs and our options. So we built a Landie instead. I’d be curious how these rigs are in the wild, lots of potential.

The Grenadiers should hit the streets first part of 2023. Ineos spent quite a bit on testing of the vehicles and putting them through some of the roughest terrain around the world. Last I heard they had in over 1M miles across 15 countries on their test vehicles.

I’m excited for sure, production level building adds a host more potential issues compared to the purpose built test mules. Either way, I’m stoked to be getting them stateside. Looks like we are not getting the diesel which is unfortunate.

Even that base level Grenadier looks pretty great. Website doesnt offer diesel which is too bad. Now that i’ve enjoyed a 2.8L turbo diesel in my Chevy Colorado for a number of years, it’s hard imagining going back to a gasser. But anyway, that Ineos base model is more than double the cost of my pickup… so i’ll stick with what i have LOl

Agreed, I’ll be sticking with my Defender too!

Nice! Been waiting for someone to put an RTT on a New Defender. Def share some pictures once you have it mounted up.

Got the Frontrunner rack on! Just finished a 6,523 mile trip to attend a work meeting and pick up my RTT at GFC!

Did some trails, some camping, and a whole lot of sightseeing and it was amazing. 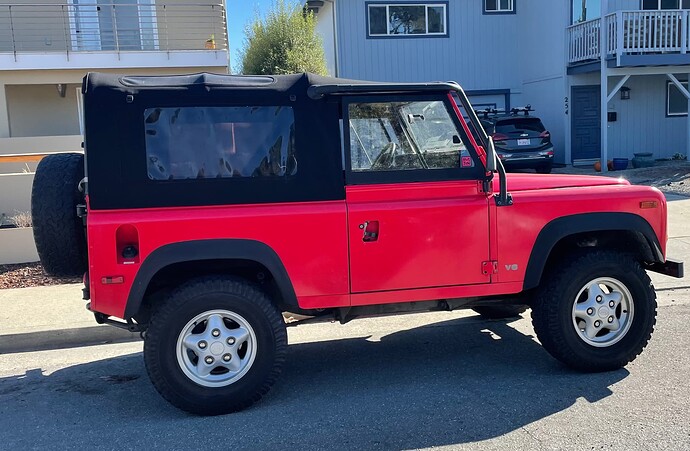 Defender 90 on steelies is such a sick look!

My wife works for Land Rover and her boss has a V8110 on 37"s that he has actually been running on some pretty gnarly stuff. Not a ton of articulation, but cool rigs nonetheless.