I was wondering if anyone has any experience running a cargo box (Yakima/Thule ect.) on top. The GFC FAQ notes that they can carry up to 500lbs closed and up to 75-100lbs when opened. I assume this is because the weight will cause the struts for the tent to wear out and could cause it to not lift/shut on its own when there is too much weight on top.

I saw on Tacoma World that someone had the tent open with a kayak on top but knowing that kayaks can be pretty light, I was wondering if anyone has dumped a bunch of gear into a box and tried to open it. I definitely don’t want to damage/wear out the struts but it would indeed be very convenient to throw camping, fishing and surfing gear up top and not have to worry about unloading everything before popping it up.

I do not have a cargo box but I have put two kayaks on top of mine and it opens no problem and stays open.
The kayaks in this picture weigh about 50 lbs each. You should have no problem with a cargo box and putting your gear in there . I want to do a cargo box as well but need to figure out how to attach it to the beef rack bars. 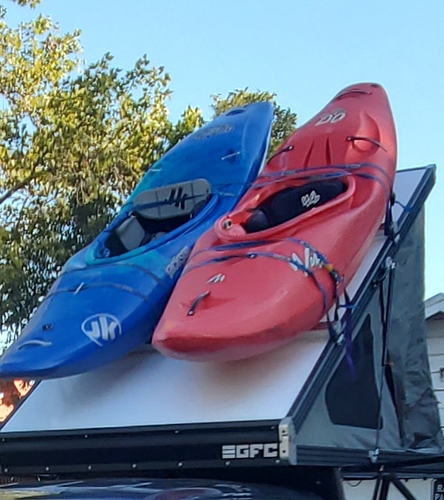 Hey,
I had a thule cargo box on mine last winter. Loaded with snowboard gear and waders.I had the box mounted near the center/back and had to “assist” the struts while opening the top. I ended up unloading gear at camp to not put any additional stress on the struts.
That being said… If you were to mount your box near the front of the camper (cab of the truck) I don’t think you would have any issues!