Well I can’t decide if it’s the short days, the cold temps or a vicious combination of both. But over the weekend while out ski touring it seemed like my C&D Tel12-90 battery wasn’t getting fully charged throughout the day. Albeit, this was a salvaged battery heading to recycling but it’s conductance readings at the time were good.

The battery dropped to 10.3 last night, so unfortunately my heater won’t work at that voltage (as I learned). Does anyone have any battery suggestions for a replacement that is better for cold weather use?

Also, any tips on keeping your solar panel clear of snow?

i went with a fullriver agm battery - talked myself out of li-ion because of cold temps. deep cycle and the redarc bcdc+100w panel keep that thing charged over 13.2v all the time. i have not done extensive night time testing while running things like heaters or fridges, but it should handle it just fine. i really wish “they” would just get on with the next big battery breakthrough already…right?

clearing snow from solar arrays is a normal chore of an off grid mountain cabin… but these arrays are almost always angled to shed snow between “sweepings” … not exactly a helpful suggestion for a truck roof. i brushed 4" snow off my panel just yesterday using the brush on the back of my ice scraper… 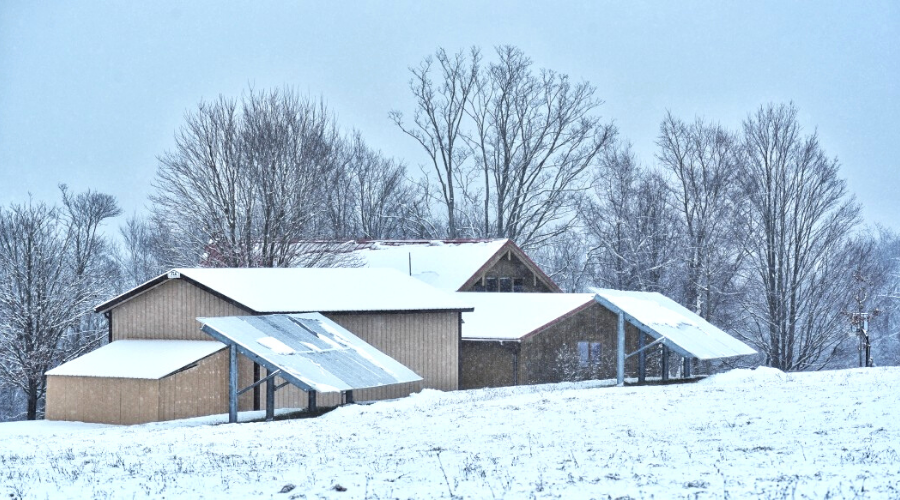 Winterizing 101: A Guide to Keeping Snow Off Your Solar Panels - Backyard Boss

Believe it or not, winter is typically a good time for solar panels because they function better in colder weather, producing more energy. Being surrounded by snow can lead to solar panels intaking a record amount of energy because of the...

We use a silicone spray to lubricate our rubber goods at work (lineman), and last winter I used it on my shovel to keep snow from sticking. It worked pretty well. Maybe something similar would work for solar panels. It would help with water beading too.

That’s an interesting idea. I wonder how it would react to the plastic of the panel? I never thought of that with the shovel LOL.

Yeah it works well on the shovel. I used the Salisbury Salcor-99 https://www.neobits.com/salisbury_honeywell_s99_salisbury_salcor_silicone_p15169171.html

A little pricy but I have a Battle Born 100ah battery with built in heater in my National Luna DC25 power pack… its never gone below 13.1 voltage even with temperatures below freezing and this is with 200 watts of solar on the roof of the GFC and a DC-DC charger.

@the_philxx curious what you mean by:
“talked myself out of li-ion because of cold temps”
My understanding is that lithium performs far better in cold temperatures than lead acid.

Just what people said to me when I was looking for batteries - they don’t like hot (can’t be in engine bay) and need to be “heated” to work in the cold (can’t hang out in the camper in winter). Recall I said I am not an expert… I think @OverlandKyle mentioned he has a Li-Ion with a built in heater - that’s a smart idea I didn’t know about but they are a bit expensive… like well over a grand expensive. (edit… they are on sale for just UNDER a grand: 100Ah 12V GC2 LiFePO4 Heated Battery Kit – 1 Battery | Battle Born Batteries)

Google “does lithium ion work in the cold” and I get two top results that directly conflict. Also recall that I mentioned battery talk is about as divisive as it gets! That’s pretty much consistent with my understanding. From what I remember from the course I took in grad school all battery chemistries are horrible in the cold but lithium keeps it’s charge the best. Because there is no chemical reaction happening in the battery it’s less important for those atoms to be all warm and happy and bouncing around in there. The catch is you can’t charge them below freezing which does present a real problem for camper applications. Pick your poison extra capacity or easier to charge.

For a house battery I am planning on a heated 100ah LiF3PO4 from Battle Born. This 100Ah 12V Heated Battery Kit provides you with a low draw heating solution to help you get out there and stay out there in cold weather!

The heating element is internally controlled and low drawl. I am planning on ~175w solar and 100ah in hopes of supporting a heated blanket under our sleeping bags for cold nights up here in Colorado.

Yeah, I’m starting to look at the same solution. Renogy makes a similar battery so I’m going to pull the trigger on one of those. I really don’t want to have to be pulling the battery out all the time, it’s not the easiest location. And it’s below 0C here as much as it’s above 0C so I need a solution for sure.

Weighing at just a bit over 25 lbs, Renogy's LFP battery surpasses expectation by being lighter, compact, and more powerful than its lead-acid battery counterparts of 100Ah.

Might even swap out the Eco-worthy controller for a Renogy controller just to make things consistent.

These ones appear to sense the temperature and operate automatically. I’m going to try it out as it is; but the new controller I’m getting from Renogy also has a temperature probe option. So, I may splurge the $12 and get that to help with temperature compensation.

I’m curious to hear how well it stays charged. I too struggle with how to keep the panel clear of ice and snow (especially since I can’t see how clear it is when the camper is closed).

The heated LiFePO4 batteries are a great idea and I may have to get one too. I would be tempted to run it off both the alternator and the solar panel, just so I don’t have to be quite so religious about clearing the panel. The West Mountain Radio Epic PWRGate controller I have lets you set a minimum voltage on the DC input, so you can configure it to only charge from that source when the truck is running and the voltage is up.

I have this ability…. I can switch between solar, alternator, or shore power

When you do this though, don’t you have to be sure your two batteries of of similar AH and makeup? Otherwise you run the risk of prematurely damaging a battery?

I’ve contemplated this option; but it is that theory that deters me and the cost of wiring from the front left to the rear right of my truck. I’m 100% positive now that the ‘Salvaged’ battery I got out of recycling at work that tested good in the summer is in fact bad. I had it on charge all last night and today with a heater and the voltage is only at 12.7 and won’t go to the appropriate float of 13.8. The conductance test fails using a 1708 ref I get like 290 ohms. So, I’m going to swap it out with another one I have and bring a spare for this weekend so my wife doesn’t get soured on the camper because the heater dies LOL.

I kept it simple and bypassed all of that with the National Luna DC25 power pack…… I run an AGM in front and an Lithium in the box….whatever it is that’s in there makes everything work together well

Lookup DC-DC chargers, they isolate the batteries and can optimize charging the house battery. This site explains it (and a lot of other DC power stuff) well: DC-DC battery chargers explained

Good point about the cost of cabling though. I’d be looking to have my battery on the right-rear as well.

I heard Propane generator do good in cold weather you could get one of these small ones as back up…and buy a battery warming blanket to warm the batteries…to get a charge during the day… kinda expensive option but that was my plan. My set up kinda needs a extra way to charge anyways…The solar panel I got doesn’t seem to keep up…I was going to throw it on my front hitch and run a electric cord under the truck and threw my cubby were I have the solar panel cord going from…

I’ve been looking to go this. What kind of set up are you running to switch between power sources?