Has anyone heard of the Ironman Delta Wing. Looks like a good awning at half the price of many others? Anyone have one that can vouch for it? 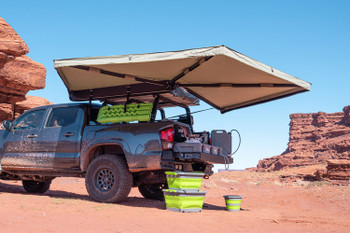 Ironman 4x4 America offers off-road accessories, parts, and equipment for the off-roading enthusiast. Check out our website for more information.

Also curious about this one. I had their Alpha 2 tent and it was great quality. I’m leaning towards the Ironman because they have 25% off right now.

yeah that’s a killer deal, I am now debating between this and the OVS, but the ironman is only 44 lbs, that is amazing.

I’ve one and I love it. It’s really only freestanding if you’re under six feet and it isn’t windy. The legs are solid deploy quick and it’s super sturdy when it’s all staked out. Alas, I don’t have any decent pictures of it deployed, but here’s some jank. I used a gfc right angle bracket as an attachment point for the strap on the passengers side. Thanks for the pics and review. Looks great.

Looks sweet! Is there a way to set up the tension strap so it wouldn’t interfere with a ladder for access to the camper?

You can adjust the attachment point, but alas there’s no way to get it totally out of the way. I just go through the bed during the day and close the awning at night. It’s super quick to deploy so it hasn’t been too much of an annoyance so far.

Mine was installed in April, and I’m pretty pleased so far, especially considering the weight and price point.

I ordered mine and it showed up 2 days later, no extra shipping or anything like that, my install date isnt until the end of July. It looks like great quality so far.

The Ironman 270 awning is awesome How did y’all attach the Ironman awning? Did you use the GFC universal brackets or some hardware that came with it?