I can already assume the cost is not great. But…has anyone had their GFC platform camper shipped to Canada? Specifically BC?

Looking for options in the event that the border doesn’t open.

What is your build? I have a 6.5’ Ram should be done soon. They are working on getting a shipping quote. I plan to ship it to Calgary and go get it. Seems about $1500-2000 for the crate, shipping and duties.

GFc called to book my install date but when they found out I’m in Canada they said they would Email me right after the phone call …. That was 2 weeks ago.

2208 is my build number, just got it off here a week ago. What’s your build number? Your story is my biggest fear. Been reading some pretty negative experiences as of late regarding customer service. Actually reached out to super pacific this morning to see if they’ve approved the 2014 Ram yet.

I am in the 1200’s. I am pretty sure GFC blocks your email as soon as full payment is received. Had worse luck with SP though, they couldn’t even confirm if they will ever build a unit for my truck and I want the lowest weight possible. So GFC it is. I’m excited for my unit, which is still ahead of schedule from the original order promised date. So everything should still work out.

Oh man that’s not reassuring, what year is your truck?

Here’s an update…since the border didn’t open for Canadians I had all kinds of grand ideas to get the camper up to central BC. I had a friend lined up, but turns out he has a file with the CBSA for bringing dog food into the country; so didn’t want to take the chance that he’d get turned around.

I opted to go with a company called SHIPCANADA.ca. So far, it has been a complete nightmare! The price was reasonable but that’s probably because they do such a poor job. They picked up the camper at GFC on Sept 13th, I wasn’t informed from the courier that it had even been picked up. I had to be told by GFC that they had in fact taken it. Then for whatever reason, they brought the camper to Salt Lake, UT. Then brought it to its current location, Boise, ID on Sept 15. I received an email from GFC saying the courier was looking for the Invoice so they could get the customs clearance. I was told delivery would be 6-8 days…as it stands it’s been 6 days and it hasn’t even crossed the border yet and looks to have swapped trucks at least twice so far.

Shipcanada had no idea what was going on, or even where my shipment was. They were supposed to provide the courier with the Commercial Invoice and CUSMA form along with details about which Customs broker I was using. I called the contracted courier in Ohio and was able to provide them that information. Good news is my shipment has cleared customs, but the tracking information I’ve been given indicates that the camper is still in ID.

So far it has cost me $1300 CAD to have it shipped with insurance from Belgrade to Williams Lake, BC. For those that are curious, it was $1400 in taxes and no duty because the camper is US made (as you surely know)

So…here’s to hoping the rest of you who are waiting are able to get across the border. If you do decided to try to have it shipped I would not recommend using Shipcanada.ca.

steps off of soap box

Well here’s the official word of warning…don’t ship it yourself. I still have yet to receive my camper as it got ‘lost’. It is still in Surrey but slated to be on the truck tonight to come up to Williams Lake. I had them send me a picture and sadly…it’s damaged. So far all I can confirm is that the front window is broken and missing. And it’s tough to say but there looks to be a scuff on the side.

No fault of GFC, but I did ask to have the unit somewhat protected by cardboard. But because I didn’t want crating because of the cost and weight. This is what you get when it’s shipped, bare bones. Luckily I have insurance on the shipment but it’s going to be a bit of a rash to get it repaired. GFC is going to be accommodating so far and get some glass and seal shipped up to me ASAP as soon as I confirm the rest of the delivery.

Learn from my mistakes. 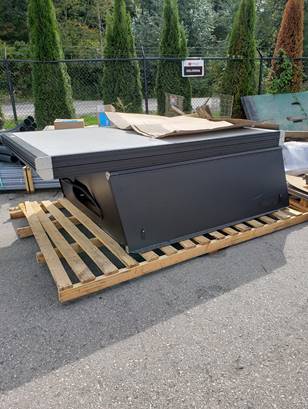 Sorry to hear about the damage, hopefully repairs can happen quickly, but it will be worth it to have it sooner and be using it this fall!

Sounds like the window actually isn’t broken and that it just popped out of the seal. Which is suspicious considering these things are ‘huckable’. I’ll post updates on my build post tomorrow when I pick it up after 10am MST.

Then to try and find three friends to help lift it on.

Regarding the tax, is this both gst and pst. If I pick up in Montana I want to make sure I don’t get overcharged. $1400 cad seems less than what I was calculating but maybe that is due to the price increase of the camper.

That was both, but make sure you get a CUSMA from GFC. Because the camper is built in the US you don’t have to pay duty.

Just a thought… I may be ignorant here but how would they know that the camper was bought on the trip, what if it’s always been on the truck?..… not saying anyone should lie or skirt it but a legit question here

Don’t think I didn’t think of this. The biggest thing is it worth going to prison, hefty fine on top of being banned from entering the US. It would be nice to have not paid the 1400 in tax, but it would definitely not be worth it.

I did claim it when I came in, they still pulled me in, took my phone, and all my paperwork. I’ll be it, I was in a different scenario where I had already paid the tax on the unit that was shipped and damaged. That’s what I tell myself. Since touring with bands years ago….I can count how many times I’ve crossed the border without getting pulled in for questioning 3 times