So my Blind spot sensors went out… so I took it in to Toyota as I was still under warranty by a few hundred miles. Basically they said my shocks were kinda shot and my rear was sagging enough to throw it off? They put in new ones and seems to be working after they recalibrated it. But they said I should put an air bags on the rear. 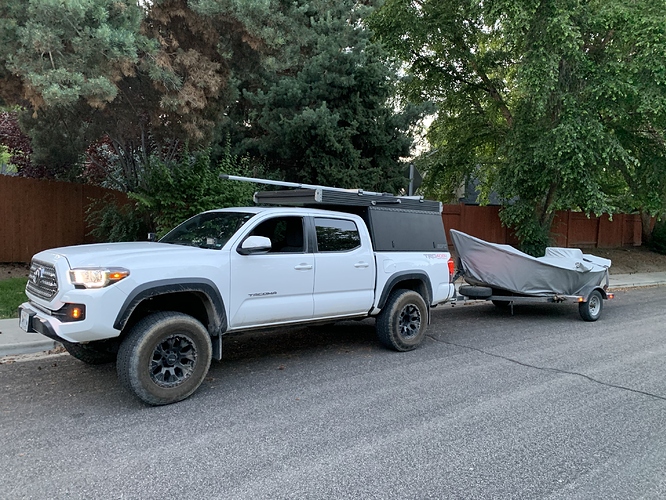 I have a 2017 TRD Off Road that is on 285’s with just the 3 and 1 blocks to give it some look. First off… hate how it drives because it’s still stock suspension just on blocks… it’s been a couple years and I’ve put about 25k miles is all and now thinking I should just do a new suspension on the truck.

What recommendations do you have to fit 285’s and swap out the current set up?

Have a small family of 3 with second kid on the way. So I’d be most likely using the bed of the truck as extra sleeping so I think I’d put some extra weight back there… maybe to build a sleeping set up. Don’t do any crazy off road… but love Utah and going down south to explore or up in the Mountains so I’d say I would do some decent off road but nothing I’d have to think twice about… only tow my drift boat which is like 1,000 pounds with the trailer.

This is why you do it right at first, or don’t do it until you can.

“First off… hate how it drives because it’s still stock suspension just on blocks…”
Sounds like you may have caused some damage from not correctly supporting the amount of weight you’re carrying for 25k, especially if you’re also towing. This is what happens when people “go for looks” instead of functionality.

Go weigh your truck full first on a scale. Then take that amount and add about 300lbs and find a leaf pack (suggest deavers) that is suited to carry AT LEAST that amount. Then also look at a 2.5 shock and/or airbags if you’ll be consistently carrying that much.

Maybe I’m being a little harsh on the set up. This was done at the Toyota dealership and there are plenty of tacomas and 4 runners on the 3 and 1 spacers.

I just know that it seems to run the shocks out faster than normal. What shocks would you recommend? I’d rather just swap the front and rear and maybe add a lead or something but don’t know what brand or set up would be best for my use.

“I’d rather just swap the front and rear and maybe add a lead or something but don’t know what brand or set up would be best for my use.”

Weigh your truck first. An add a leaf will be like using a toothpick to support a bridge. If anyone is carrying a substantial amount of weight in their bed and/or towing, you will need a substantial upgrade in the rear, meaning new leaf pack, and a bigger shock in the rear at the bare minimum.

With that said, I recommend looking at the bilstein 2.5 rear reservoir shocks since it sounds like you won’t be doing anything too demanding and save some money. If you were, and money isn’t an issue I would suggest King’s.

Also blocks ≠ suspension upgrade. They are a negative addition to any vehicle, despite how it may look, it will ride like shit.

If you are sagging, isn’t it the leaf springs they should be replacing?

Yes, but want to upgrade the suspension too

I have OME 3” suspension which is nice. No complaints there and I have an Alcan leaf pack made to hold about 1000 lbs and popped the rear up about 2”. I stuff the back of the truck, plus a swing out bumper and heavy awning. Definitely get a nice heavy duty leaf pack. No add a leaf.