Has anyone mounted an Alu-cab Shadow Awning to a GFC yet? I’ve got three of the new awning brackets, but most of the standard Alu-cab mounting methods tend to place some kind of support perpendicular to the main axis of the awning. My gut sense is that three awning brackets will distribute the load sufficiently, but I suppose it would be possible to rig up something to attach a mount to the backside of the GFC too.

Sooooooo full disclosure i know longer own my GFC, I currently have a Alu-Cab Khaya with a Shadow awning installed.

That said I had a 2500mm ARB awning on my GFC with three brackets and it was awesome. IF I still had the GFC I would 1000% get the Kinsman Hardware 270 awning with brackets built for the GFC. The Shadow is awesome and I love it but the Kinsman has brackets made to mount to the GFC. In my opinion it’s not only the best it’s really the only option for a 270 on a GFC.

Good luck! Feel free to ask me anything about the Shadow though if you are curious. I’ve been very happy with it.

Thanks Yota! You’re spot on, the Kinsmen awning looks fantastic and bolts straight up to the GFC. I’m looking at the Alu-cab for two main reasons: 1) it doesn’t have the long wait of the Kinsmen, and 2) it’s around 20lb lighter (and I’m already maxing roof load capacity with the RTT).

You’re right the Alu-Cab is lighter. I had one of the first GFC’s I suppose i should add I personally spoke with Graeme FTF, and he said GFC would not be supporting the Shadow Awning because of the very large profile causing it to stick up above the GFC itself. Now granted this was more than a year ago.

If you’re concerned with weight get a traditional awning. We LOVED our ARB 2500 it was amazing, light, and inexpensive.

270’s are cool and simple for one person setup but large, expensive, and awkward.

If you need one person setup the Swift awning might be a good option???

Again this is from experience with both. If i did it today and owned the GFC I’d be a Kinsman.

I’m guessing yours is a RTT??? perhaps things are different with the tent version.

I’m 100% positive you can make a Shadow awn stick to a GFC. IF NONE of the companies are supporting the idea you should really ask yourself why? If it was a good idea trust me people would be doing it. Food for thought.

I have had the Kinsmen awning on my GFC (2nd Gen Taco) for couple of weeks. It is super fast to deploy and has great coverage. I thought it was a bear to install. It is heavy and getting the bolt holes lined up is a pain. Getting the T-nuts to go vertical (with very limited space to work) and stay in the extrusion is also a pain and I wouldn’t torque to their specs (9 ft/lbs) as I deformed the T-nut piece inside the extrusion - best just to snug them up. My awning arrived with 4 small holes in the fabric (about 1/4") long and looks like during shipping the steel arms just wore those holes. Also had small hole in case. I used some Tenacious Tape to patch it up. I told Matthew about it and he was sympathetic but that was about it.
I also have the Swift awning on my GFC and it was a breeze to install, no holes, really a light, great little awning. I actually have both awnings on my truck right now.

What I’m looking for is a one-person setup awning that can wrap around to the back of the vehicle (where my cooking setup is). I currently have a James Baroud 8’ awning, but it’s a real pain to setup solo and only extends out the side.

@pygmyowl I also have found the T-nuts to be a nightmare at times. They can be exceedingly difficult to go vertical, and I don’t trust them unless I can fully inspect them.

I’ve been curious about this 180 degree rear mounted awning . Expedition Portal did a review of the 270 and it got a good rating. I suspect that Darche has cleaned up the minor faults by now. https://expeditionportal.com/made-in-the-shade/
https://darche.com.au/touring/awnings-annexes/_item/eclipse-180-rear-awning-1 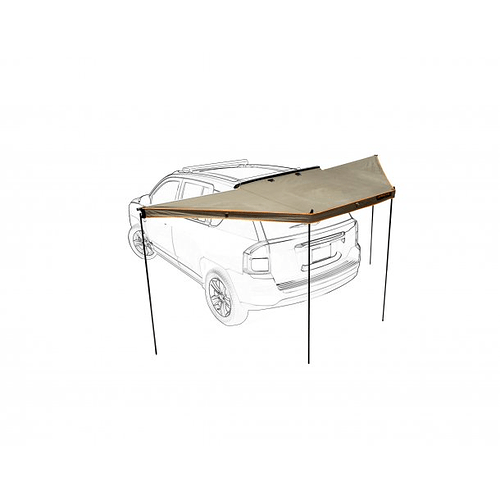 It was that ExPo article that sold me on the Alu-cab. I had a Bundutec on order but after reading their experience with it, I decided to cancel.

I like the idea of hanging the awning off the rear so that in very windy conditions the truck can be pointed into the wind. Also hiding it, when furled, behind the GFC is more aerodynamic.

Good day, Bought 3 of the new brackets to go with the Batwing (3 is perfect and a must), used the side annex’s to provide added living space, ultimately went with Batwing for price and weight as well as saw the products demo’d together at Overland West ‘19 and I haven’t been disappointed.
The adjustable legs have helped with wind and rain deflection more than expected.
Brackets lined up perfectly, I did the install alone in about 45 min.
Would’ve been a little faster with an additional hand on deck.

Just found out the hard way that the upgraded GFC aluminum rear pull bar design makes the kinsmen hardware awning rear bracket no longer compatible. Ugh. I was looking forward to using it the next 4 weeks. Open for any suggestions. My current thought is to thread the GFC sliding plug further back to avoid it hitting the awning bracket.

Long term I feel like kinsmen needs to change their bracket but my idea could hold me over, sadly I don’t have the ability to thread to plug at home 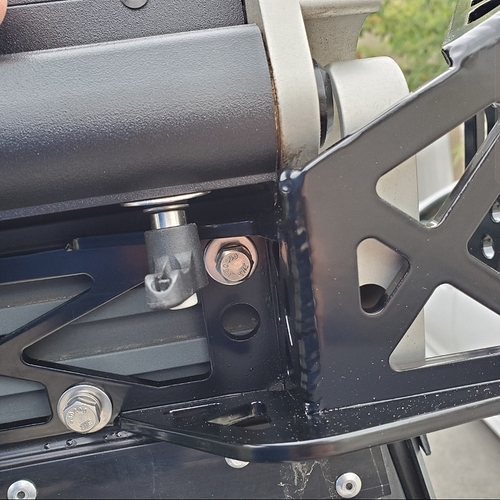 If you have room on the side towards the rear of the camper you could mount a latch similar to this. With mine adjusted as shown in the picture there is no pressure on the sliding plug. 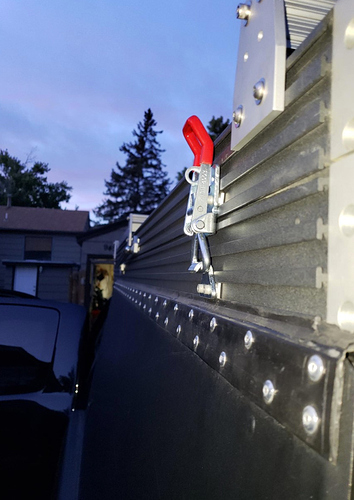 Is it in the right spot to tighten but it just can’t spin around because of the handle on the pin? If that’s the case, the handle pops out and spins freely so you could still tighten it down it would just take a bunch of 1/4 turns.

Negative, there is essentially a bracing triangle in the bracket that prevents the pin from going into the corner. After fully installing the bracket the sliding latch doesn’t even make it far enough to secure the roof at all hence the gap in the picture.

That might be a good temporary solution. I’m waiting to hear back from GFC and Kinsmen about their ideas.

Haha, super obvious it’s not even latched now that you point it out. My bad.

I have a Kinsmen also, but fortunately have the old style locking pin - any ideas why they switched the position of the pin - can’t see any advantage but probably missing something?

You can’t see it in the picture, but the entire bottom of the new pull bars are completely open. There is about 1/4 to 1/2 inch open line down the entire length of the new version. I.e. I can slide the latching mechanism to the other side if I wanted. Less material, lighter, and no way it holds onto water now.

If Kinsmen end up replacing your bracket with an updated model, I’d be very interested to buy your old bracket off you!

Hope I’m wrong, but it appears the new location of the locking pin may prevent one from mounting a single rear awning? Please tell me I’m wrong.