What do you all think? Good idea or bad idea?
Attached sketches.
I’m thinking 80/20 extrusion bolted onto the front GFC utility track. The GFC lower extrusion returns about 2-1/2" back so the 80/20 would sit under the GFC extrusion and the weight of stored items out front would be counter balanced by the 80/20 bearing on the under side of the GFC extrusion. I’d use a 3"x3" double gusset angle to hold the 80/20 up on the GFC utility track with their hardware. 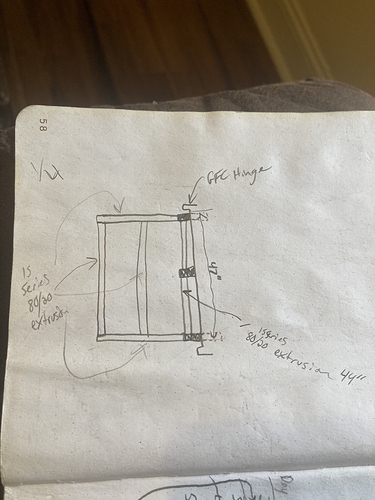 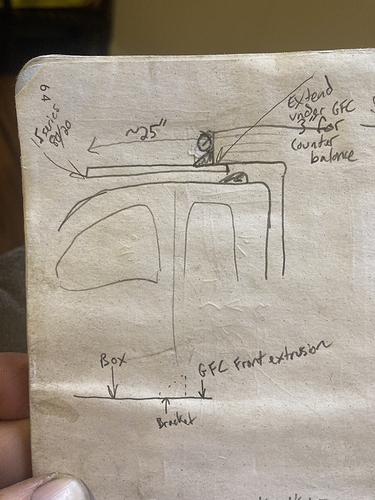 Cool idea. Like it. I’m not sure about the torqued weight force that it would create on the extrusion. That’s an engineering question. I don’t know if I’d feel good about gas containers or anything heavy.
Is this rack going to slide back under the GFC when not in use?

Hopefully others will chime in…

I like the concept. I don’t know the math to back it up, but it seems like even a small load would create too much force for the aluminum extrusion without a bunch more overlap. Maybe overlap along the sides to get a bunch more attachment points? I’d definitely think you’d have to empty it off-roading.

I like the idea. I think it’s a good alternative to putting a rack mounted to the top of the truck cab. @Mike_GFCUSA, posted this picture of his truck a while ago. If you zoom in you can see he made something similar but more stout than what you have drawn up. I saw it in person and really liked it. 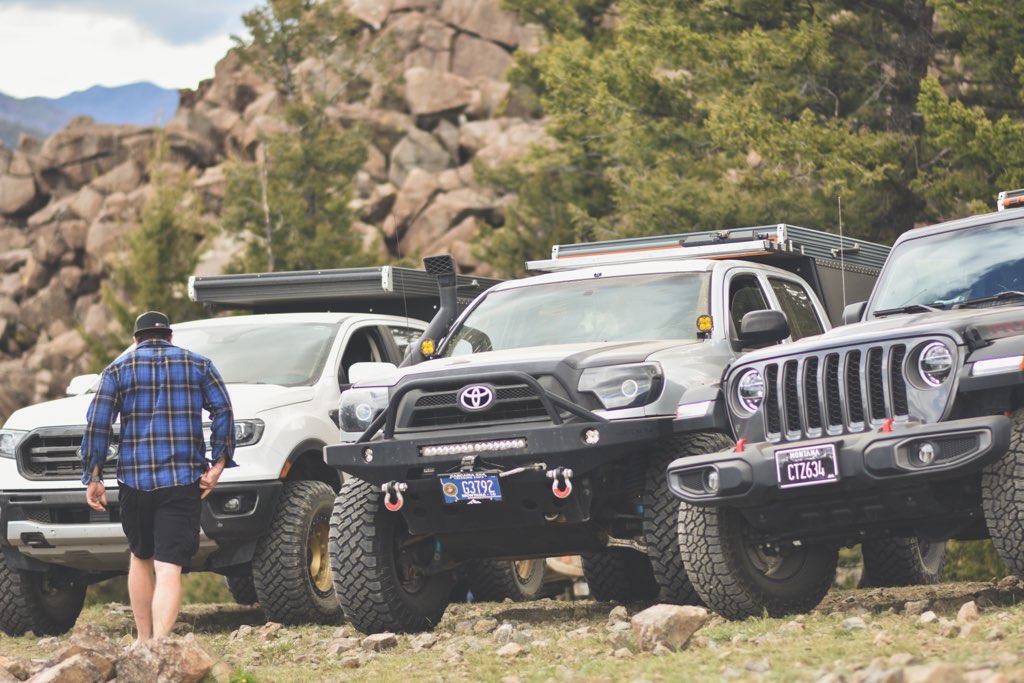 I believe people have tried that before. GFC might have even made a prototype. I believe the downsides were significant noise at high speed and couldn’t hold too much weight.

Edit: I was partially right. Mike coming in clutch with the details.

My rack is a prototype, though I am unsure if we will ever produce them. I personally do not have any negative things to say about it. The second gen Tacoma had a better cab to bed height ratio for the GFC than the other Tacomas so my camper and rack sit closer to the cab so there is no wind noise. I store light stuff up there but have stood on it and jumped without issue and I am about 220# plus the added force of the impact etc etc. The prototype is also very short so it does not hold a lot anyway. A set for Maxtrax or like I do my snow shovel and misc small items.

@Jcrodes. Now is your chance… Work on this. Make it strong and able to slide back under the GFC, I’d be interested. I have the access cab.

Thanks all for chiming in.

Yea so I had seen that prototype a long time ago on Graeme’s truck I think when he went down to Baja to test out stuff. I was hoping to find a pic of it again so thanks for posting it.

So I’m wanting to store two wolf packs with random work stuff totaling a 100lbs or so.

I got a bit into it on the 8020 website and used their deflection calculator. Worst case with putting 100lbs out on the end of 1 bar at 24" had it deflecting about 3/16". I think I can make it burlier so 1530 extrusion profile on its side brought that deflection to .026" which is nothing.

I don’t see a need to slide the rack back under the camper when not in use… Why would you prefer that GFC706? More so for aesthetics?

Well I’ll probably order parts here in a couple days. Looks like I should be able to build it for about $225 or so. Which is about half of the cheapest cab mounted rack I could find…

I found an old screenshot I took a long time ago for the prototype they were working on. It’s a better close up angle of it.

@Jcrodes Yeah, aesthetics, but also I feel like the noise would be less under the GFC. Also, I just wonder about vibrations and movement at higher speeds when unloaded and hanging out over the cab. Totally off the cuff feeling.

Alright folks, well I built a rough prototype out of wood and put an empty Wolfpack up there. Went out for a drive on the highway up to 80mph or so and it didn’t whistle or anything. I was to lazy to take off the ladder, but the prototype didn’t add any noise the ladder was already making which wasn’t much of anything.

I bought all the parts so I’ll post up some pics of it completed with me standing on it hopefully! 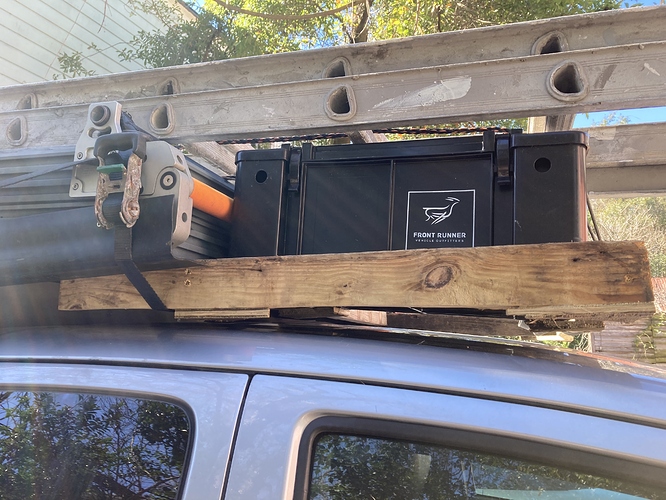 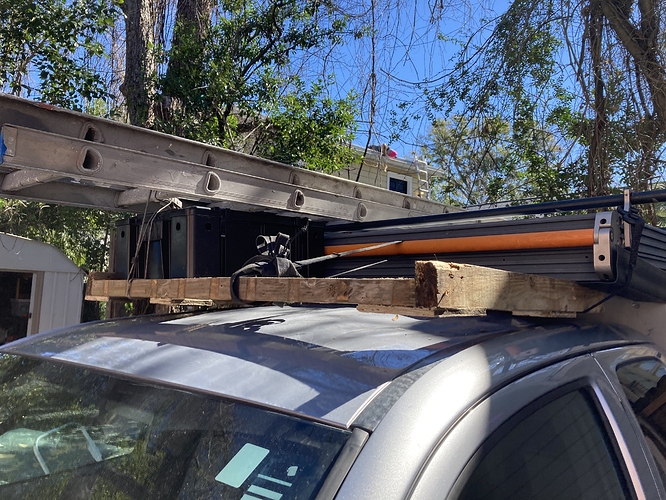 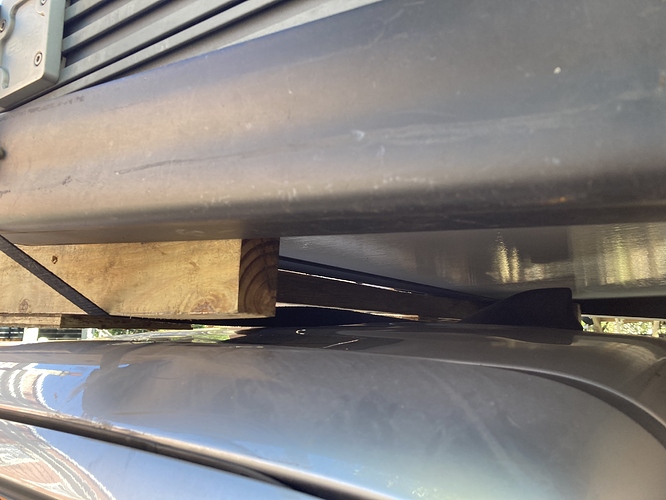 Nice! Can’t wait to see what you come up with.

I am sure the wood is thicker than what you will be using but we did flex test my truck to make sure the rack would not hit the cab and it just barely cleared flexed all the way out on our loading ramp at GFC, just something ton consider!

Good thought. I saw the center of the cab is the highest point. By chance do you have an idea what the clearance of the prototype rack is before flexing?

Stoked to see the final version. Fantastic idea.
Hopefully it works on all the trucks

Ok so parts came in and I got the two rails on. Ordered the wrong brackets for the crossbars so hopefully those will come before this weekend.

There is a lot of flex, but it’s not coming from the cantilever setup I just put on. I’ll probably keep total weight to under 80lbs, but I think it’ll work for me.

I don’t see how to upload videos to show it flex, but my 160lbs flexes the camper/truck a little under and inch. I’ll get some more accurate measurements later

So the first time I put my weight on the new rack I noticed a lot of flex and was concerned the gfc frame may be flexing under the cantilevered load. After take some measurements and putting my level on top of the GFC frame I don’t think the GFC frame is flexing which was a relief.

Here are some pics showing the level staying in contact with the GFC frame under load. The level is centered above where the GFC extends over the truck.

Hopefully I’ll have the rest of the parts to finish this weekend. 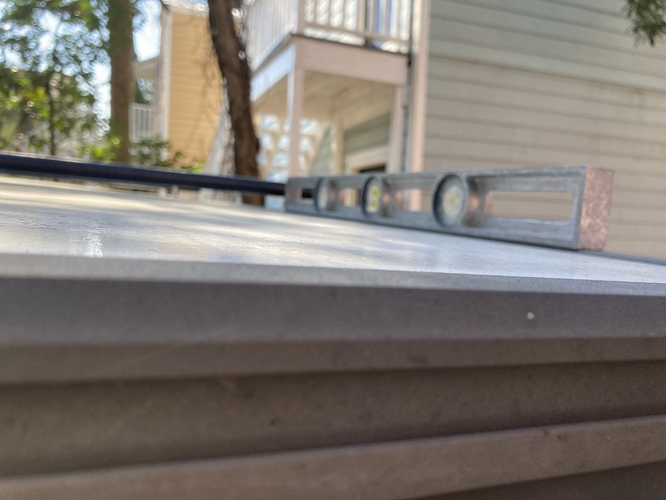 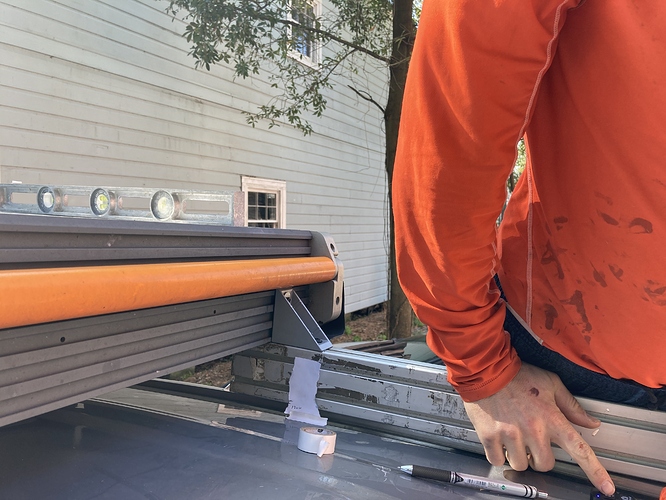 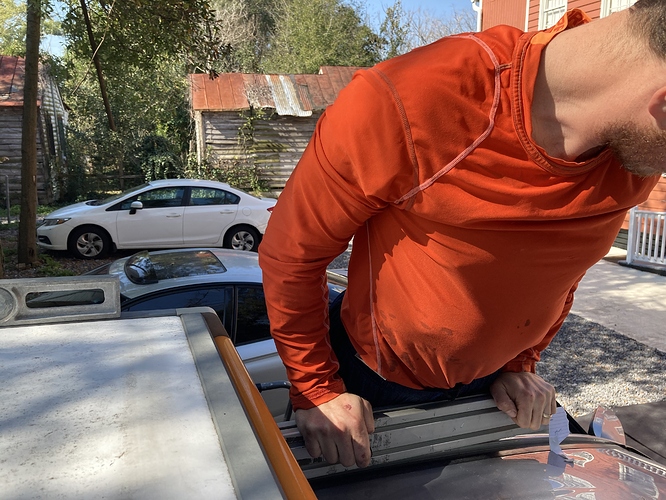 Well I think it works great. So I’m going to run it for a while.

The box is about 28lvs and I’ll be putting another on the other side that’s about 20.

It’ll take some regular checking in on the bolts (I used the blue loctite), but otherwise should be maintenance free.

I centered the rails over the stock Tacoma rubber roof seals, which allow the most room for the chassis to flex. 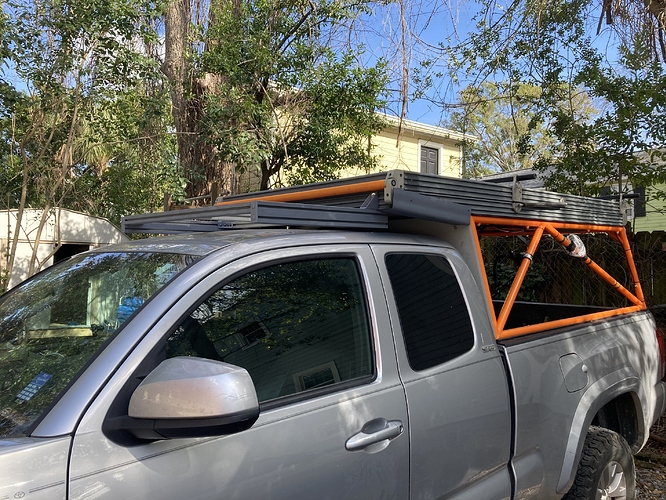 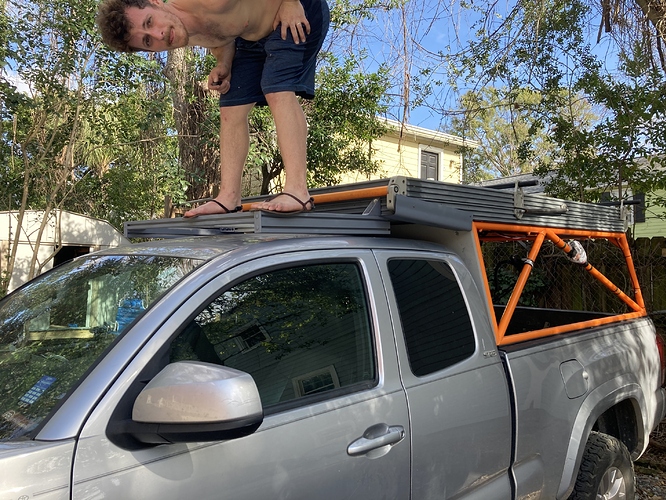 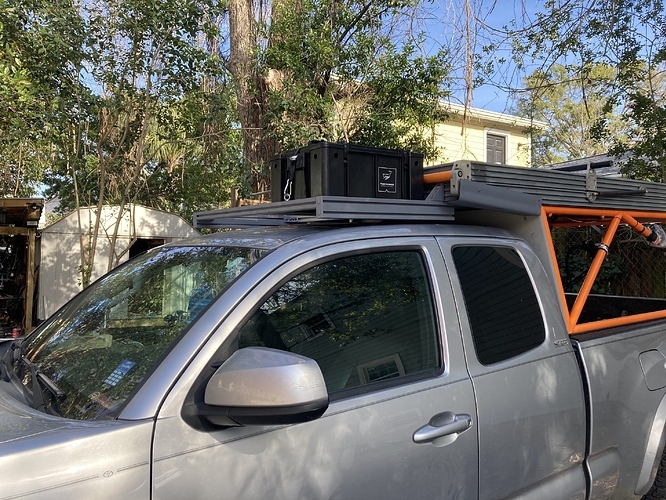 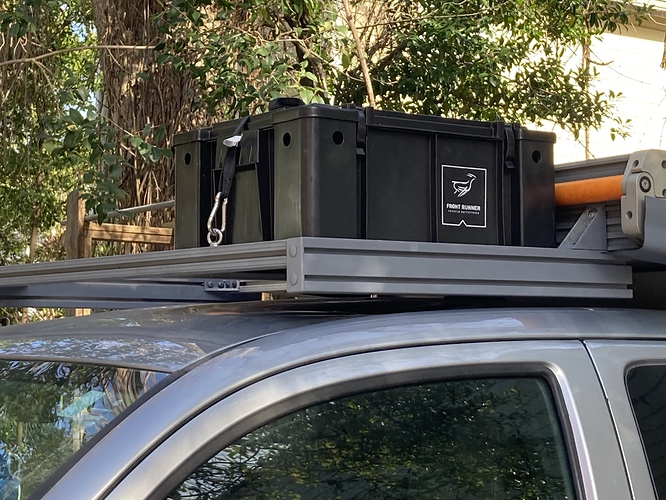