Hi guys, looking for some help/ideas with my new solar set up. I apologize if this is common knowledge but it sure threw a wrench into my plan.

I just installed two 100watt Flexible Renogy panels to the roof with lots of 3m vhb tape. Everything works great and the two panels are wired in parallel to my goalzero battery. See the picture for how they are laid out on the roof of the GFC. My initial thought was that I could keep surfboards stacked on the driver side of my camper and only lose half the solar input when its there. It turns out that if theres even just partial shade on the solar panel that it shuts down the panels input completely. In my case a surfboard going across 1/3rd of both shuts down both panels to nothing. A big bummer since I pretty much keep half of the roof covered most all the time. Take that as a warning for those of you who thought you could mount items to the roof while still getting some solar at the same time. Now It looks as though I will have to rip off the vhb tape and move the panels in a way that one is always not covered. The panels are also very limited with the parallel connection and the short cords still reaching each other will severely limit positions I can place them in. I am now thinking of having them side by side long ways (if you rotated 90deg of how they are now) - Or have them both on the passenger side (but the combination of the two would hang off the roof so I’d have to overlap them on the ends. I have to measure to see how much play they have there.

Now I understand that for either of the two panels to work they must not be covered at any point. It will be okay if I cover one with a surfboard, because the other will still work as needed. Only one thing gets in the way of me being able to do that and its the shadow from the beef racks. Ive gone ahead and tested laying a beef rack across both panels as if the panels were rotated how I am thinking of doing them (like in the second picture) From what I can tell watching the battery input is even the partial shade from the beef rack is enough to cause problems. I got to about a 3rd less to half the input when the single beef rack’s shadow covered both. I did not test whether this was turning off one of the panels completely but think it just significantly lowered the input coming from both. I also noticed depending on what part of the panel was covered by the beef rack made more or less of an impact on the input. For example where you see it in the picture was about 1/3rd to half, but if I covered the cells closest to the wiring I lost more like 75%-90% to all the input. These tests were quick and rapid and could have been slightly compromised as clouds occasionally went by.

Here is how I installed them: 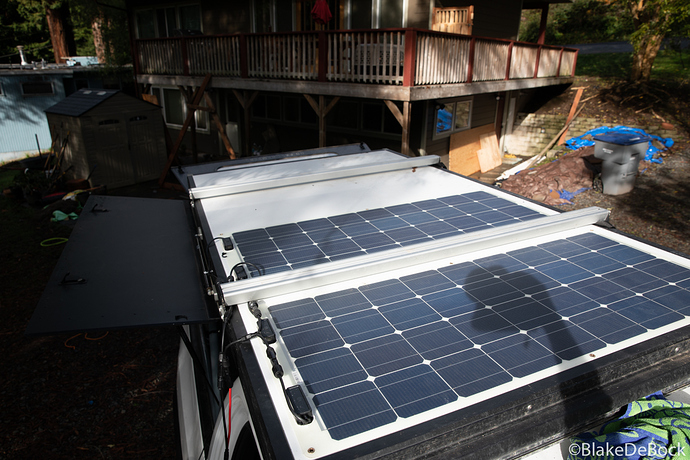 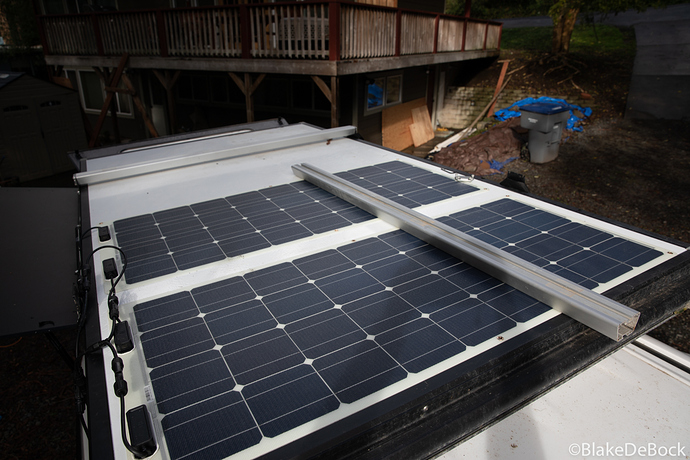 I cant think of a way to lay them out so the beef racks wont cover a part of each panel. unless I widen the racks 10in and lay them both out in the center. If I lay them out in a way where the a beef rack is partially covering each of the panels, i’m afraid i’m going to just get limited input from each and that this would not be a good way of doing it. Thoughts?

Background of my setup: I have 4x 100 W panels on my truck. They take up nearly the entire roof with about a 6 inch wide sliver left uncovered along the entire length of the driver side. They are solid frame panels mounted on custom brackets that I made that keep them flush with the top of the beef racks. The panels are connected in two parallel lines of two panels in series. I don’t typically carry much on the top, but if I do I arrange it so as not to block an entire parallel line.

With that said shade, especially shade that is always present, is a no go for panels. However there is a way to get partial power out of them based on how the panels were built. Most panels should come equipped with bypass diodes that allow for partial generation. My suggestion is to contact the company that makes your panels and ask how the diodes are connected. It’s too long to explain how bypass diodes get around shade so here is a high level overview:

Gotcha. So I guess the best thing for me would be to widen the beef racks and put them in the center so nothing is blocking sun. Then when I have boards on top I can keep them just to one side only blocking one panel.

So why did you leave the 6in sliver on the driver side rather than centering them? Out of curiosity can you post a pic of your setup?

I left space on the driver side so I can put a couple sets of skis up there without blocking the panels.

I’d suggest doing some trial and error with block a panel in certain orientations to determine how the diodes are connected to the cells then orientate accordingly with the beef bars spread out.

It’s a little hard to see the panels at this angle, but it’s the only picture I currently have posted of the panels. It’s at the end of the post.

I finally had time to take pictures of my electrical setup in my GFC. Winter has arrived in Idaho and to prevent unnecessary battery degradation I store my setup in my garage when not on a trip. After my initial prototype I designed this second iteration to have quick disconnects of all components (power sources, power sinks, and control) to enable for quick install and removal. It takes about 30 minutes for me to install or remove it. I’ll break this up into multiple posts to make it easier…

This is valuable information. My GFC is still several months away and you guys have already saved me from a costly mistake. Thank you! Thanks for sharing and pioneering.

I’m pretty sure I read that if the panels are wired in series, partial shade is fine. But, it may come down to how the solar panel is set up, too. Some panels, the charging is severely degraded if there is any shade on the panel at all.

Check Will Prowse’ youtube videos. He has a wealth of info on solar setups

It will vary with each panel as they are not all manufactured the same. The easy way to envision solar panels is to thing of a series of panels as a pipe containing a flow of water. If one panel in the series is shaded the pipe is blocked and thus no water/electricity flows.

Bypass diodes can allow some water flow (multiple pipe paths), but only if the panel is shaded in a way to allow some of the individual solar cell strings to contribute to the flow. Each panel is typically constructed of strings of solar cells connected in a way as to make miniature parallel and series connections of the solar cells. Effectiveness and power output will be highly dependent on how the solar cells are connected within each panel.

Anyone looked at the 4th d solar panels? They seem to be designed with this in mind I think

For the most part you get what you pay for when comparing panels, a good excerpt from the web:

Most panels will have bypass diodes and some more than others. The panels with more diodes and thus better performance in the shade will inherently cost more. One company doesn’t have some revolutionary magic to make their panels better than others. The same “solutions” can be found across the industry. One commonly proposed solution is adding more busbars (interconnects between solar cells). However the only real benefit is potentially a small reduction in resistance power losses and alternative paths of power flow if one connection was to break or degrade.

When it comes down to it he best way to purchase a panel would be to look at real world test data for power and efficiency ratings and thus identifying which panels have the higher quality solar cells and bypass circuitry to avoid higher power losses do to shade.

I split my time during my master’s degree working for lunar power generation/storage for a NASA project and electrical propulsion for a racecar. Solar panels and energy storage all boil down to higher costs for typically higher quality components, while some companies will try to tout “new technology” to increase their cost.

BYPASS DIODES ON EVERY CELL

Bypass diodes on each individual solar cell means we don’t have a shading issue when compared to other panels. In other solar panels, usually if you shade a cell or two in a string, the entire string goes out and doesn’t generate electricity. We don’t have that issue and that’s perfect for being outdoors.

WHY BYPASS DIODES ARE IMPORTANT?

Let’s just say you want to put a kayak on top of your rig. Typically, most competitor panels come with only two bypass diodes that string multiple solar cells. This means if you have shade, debris, or damage on one cell, the entire string of cells will turn off, making the entire module perform badly and possibly become completely useless. Bypass diodes are put in to combat hot spots and keep the electric current flowing optimally. One would think that its logical to add it to every cell but, it is expensive. Many manufacturers opt out of doing it for this very reason. XPLOR panels have bypass diodes on every cell, maximizing its performance and dependability.

I’ve been waiting a while to pull the trigger on the Renogy solar. I really like the idea of mounting flexible panels directly to the top of the GFC. (lower profile mainly)
I’ve been reading a lot about these panels as I live in the PNW and am often under a fair amount of trees. So am concerned about the shade on the panels. I was hoping someone on this forum was running them, but I haven’t ran across a thread yet.

This is great info. Also, it seems a removable panel and extender cable would allow you to put it in the sun when you are in the shade or otherwise enable you put it in an ideal position or angle.

Unfortunately there’s no such thing as a free lunch. Personally (as an electrical engineer) the things that stick out:

THANKS!! Thats just the feedback I am looking for. I saw the lower output numbers, but was wondering if it may be less juice at peak, but more consistent overall. Essentially giving you a more constant charge over the long run. However, I do see your point. At that price, you could buy 2 Renogy setups.

Ill be following this very one.