Awnings! What are your thoughts?

Those who have mounted awnings on their GFC- what are your thoughts? Favorite brand? Regrets?

I am looking at the Batwing Compact driver side model. I have the tent side door so I am flip-flopping on drivers side or passenger side mounted. Does anyone have a preference?

I pick my camper up on Friday and have an itch that cannot be scratched.

My opinion on having an awning is that it needs to be dead simple and quick to deploy and stow, or I’ll just be too damn lazy to use it most of the time.

I had a cheap arb style awning in the past (pre gfc) and unrolling/rolling it and dealing with velcro and legs was just annoying enough that I never really used it (coverage wasn’t great either, which didn’t help motivate me).

With all that in mind, I ended up getting a kinsmen hardware awning, which so far I really like. I only received it last month and being winter and all, I’ve only used it a couple times, but not having to deal with poles and guy lines means I’ll use it a lot more (I’m not sure how much of a requirement the poles and guy lines are on some of the other awnings out there). I also made a little shower curtain that attaches to it with a combination of snaps and magnets which I put to use on our last trip which was nice. The fact that they have GFC specific mounting hardware was an additional selling point. It is pricey though, so there is a trade off of cost vs convenience.

The only downside is that the awning, especially when stowed, prevents me from opening my driver’s side panel as far as I’d like, but I’m also 6’5", so it affects me more than most.

I got my GFC late January. Things I considered choosing the correct awning for me are:

The only awning that meats all my criteria is the Kinsmen Hardware 270. I’ve ordered the Passenger side which leaves open ladder access to the drivers side tent door as needed.

Hoping to hear the awning is on its way to my house anytime now.

I had similar needs as mentioned above. Awning needed to open/close easily or it wouldn’t see much use. It had to hold up to all kinds of weather extremes because I camp in varying conditions. Lastly it had to be on the passenger side because I have the side door on the GFC. I’ve had my kinsmen awning for months and it has treated me well.

Has anyone mounted one of the Thule awnings to a GFC? 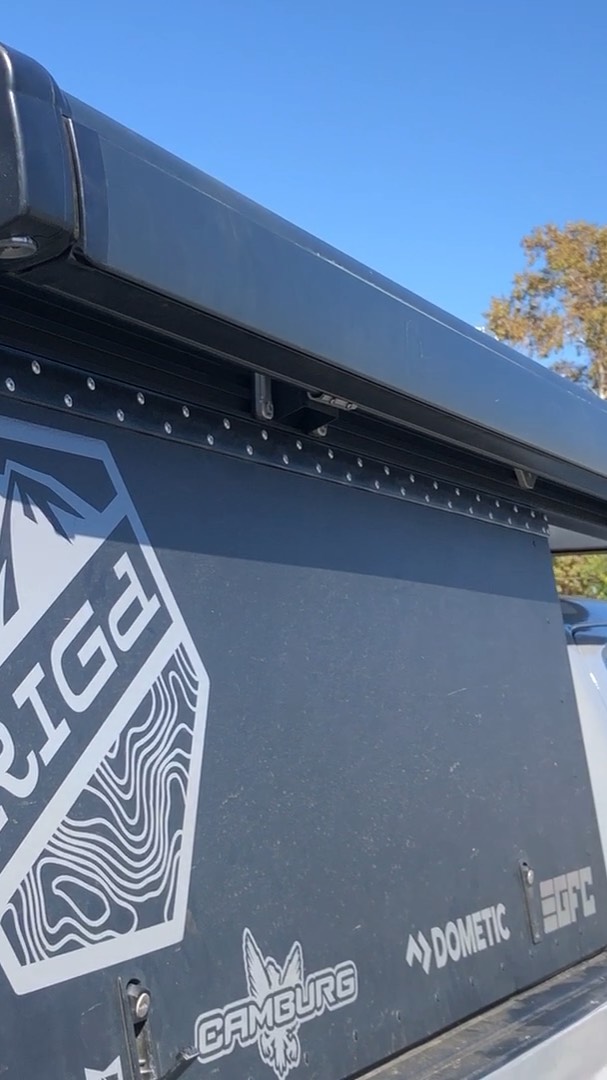 1,167 Likes, 56 Comments - Jason Denney (@tacodust) on Instagram: “Thule Hideaway 4800 hardshell awning deploys with one hand leaving your other had free for slamming…”

I think @Seekoutbeauty owns that GFC and awning now. One of the sickest Tacoma builds out there too.
Check this.

Ha yes, exactly that, thanks!
I guess the next question is: does anyone know what version/mount that was? I see that thule sells a rack mount, a wall mount and a roof mount… but I can’t for the life of me figure out what the real difference is and what the best fit for the GFC awning brackets would be.
Thanks again!

Great, thanks for the info!

I’ll send you photos today.
I’m going to be selling the awning.
Very cool, but I don’t need 70 pounds up that high on the truck.
It also squeaks a little offroad.

Going to just buy an awning tarp and two poles.

EDIT: I’m genuinely interested; I have a James Baroud 8’ awning right now that weighs 25lb. I’m very keen to replace it with one of these Thule awnings, as the tarp-style awnings are a PITA to setup by yourself.

You mind posting pics of the mounting points to the gfc? I’m interested to see how it mounts on the back of the camper

First pic is the rear mount, second is the side mount (there are two of these mounts): 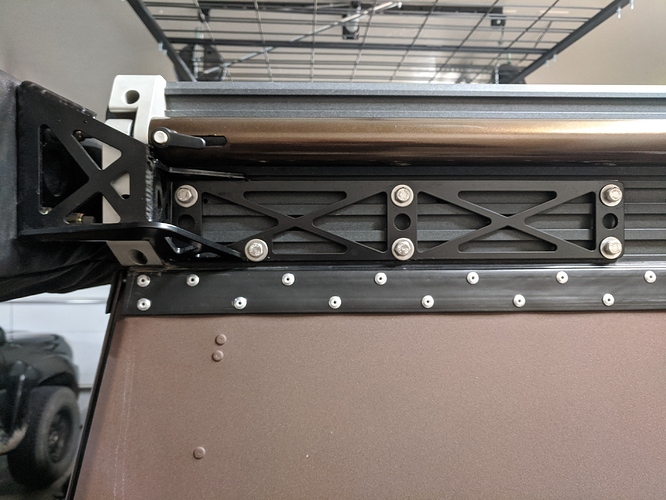 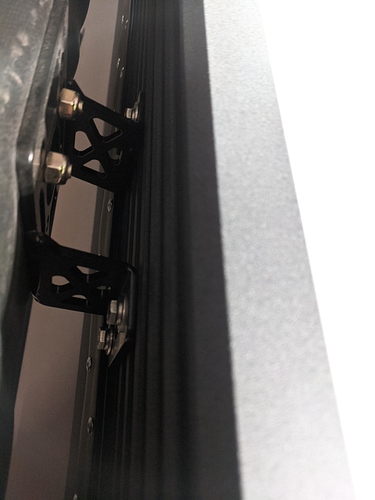 Edit: I should note that they either already have, or are working on a different rear mount to accommodate the new aluminum grab bar.

Had and loved the 12’ Fiama on our ProMaster van, but seriously considering a 270 for the GFC. The Rhino Rack 270 Batwing seems okay, and light. The Alu-Cab Shadow Awn 270 looks amazing, but heavy and expensive. Have also considered a shorter Fiama (so nice to setup/teardown) for the side, but want something over the back too.

Awesome thank you for the pics! I was curious if the @shittco window cover awning brackets would work with the kinsman awning mounts. It does not appear that they will this answered my question.

Alu-cab is a great awning but it won’t mount to the gfc. Kinsman awning is a step up from the Alu-cab and it mounts specifically to the GFC but is $$$

I have the shittco awning brackets mounted. One side is normal. For the other side with the kinsmen hardware I simply used longer bolts. The track nuts went onto either side of one of the kinsmen cross braces and then I placed the block over the top. I thought I screwed up by ordering it without thinking, but it worked out with some ingenuity.

Rock on bro! I was really looking forward to ordering a pair now that I know this I’ll proceed thanks man!

Is anyone on here using the rhino rack batwing awning? It seems easy enough to open and close that it would be used often, but I’d love to hear some first hand experiences. Also, are you using 2 or 3 gfc awning mounts?

When I was getting my GFC installed someone at the shop had the Rhino Rack Bat Wing COmpact awning. Looked sweet, thinking of going that direction myself.