Has there been any discussion from or about GFC increasing the cab over hang length in order to create more usable room inside the bed of the pickup?

I’ve always thought that would be a good idea. Then you could leave a panel out and still have plenty of room.

During the first few months of production this was brought up by customers and potential customers but never gained enough traction. There are competitors in the market that offer a longer overhang. However, I don’t think it is in the cards for the GFC in the near future. It would require a lot of additional work to implement another size. I could be wrong and GFC could have something up their sleeve, but personally I wouldn’t hold out for this type of change.

I have a Jeep Gladiator. One of the reasons I ordered the GFC is that the shorter over cab over length allows me to remove the two convertible panels in the front, any longer it would be in the way, maybe not even possible. It’s light weight, brilliant design, fantastic for my personal application.

I know I’d be interested and thanks for the reply. I figured it might have been brought up but didn’t know if anyone had heard if GFC was planning on releasing something.

That’s really my biggest complaint about the GFC. My family and I are short so we almost have enough room to sleep without the two squares installed, but not quite.

I’m probably going to remove all of the cushions as well as the square panels, then use my 77.6"x52" inflatable camp mattress with an additional smaller rectangle piece made of HDPE just big enough to equal the length of the air mattress section that doesn’t rest on the existing rectangular panel. Should create right at a foot of open space at the back and since it’s a foam/air mattress I should be able to store pillows and light blankets up there as well.

I once rented a wedge camper in South Africa, and it was configured this way. There was open standing room in back while the wedge was open. If I could modify my GFC to this configuration I would. The only issue I have currently is getting up in the middle of the night when there’s two people in the tent. Removing panels with bedding is tedious. I’ve settled on using an external ladder exclusively. Would rather have internal ingress/egress with an open space in the back.

finding a camper that suits your every need is always a compromise, there are several campers available that have dedicated open area in the back, vagabond drifter, atoverland summit, (not sure about the alucab khaya) or buying a LB (tacoma or access cab if you dont need a back seat) would give you more space as well (assuming you dont have that already) my girlfriend and i have both a gfc and a vagabond drifter, we use the drifter more, partly because having the dedicated open space is fabulous (can stand and get changed whilst someone else is already in bed) - there are some downsides, i personally dont like to leave the swingout open overnight, but im getting over it. i thought i would miss the ladder / side entry but dont, id guess in a really buggy environment the drifter would need a good bug net (as opposed to the gfc where you can have the sleeping area closed off) but so far hasnt been a problem. the sleeping area in the gfc is larger, in stock configuration but i have a 7 inch bed extender in the drifter i use, personal choice. (it was 12 inches but that left me a tighter area to stand when in place, so i recently shortened it)
they all have their pro’s and con’s lighter vs heavier, able to leave bedding in place vs not, the drifters three layer side windows are great - mesh - clear - blackout so if its raining can still see outside and be protected. its finding that balance of all the things 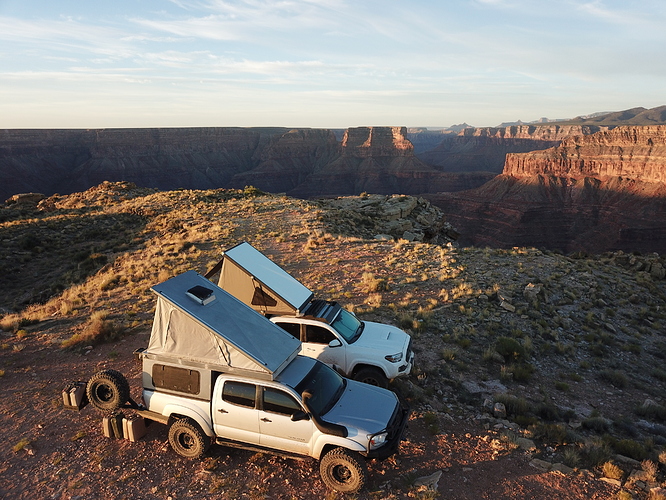 Are your trucks all dustproof? That to me would be the biggest downside of having that open space all the time. Maybe it’s not an issue though

I’m picturing it being a closed all the time just like it is now but with extra cushions to remove as necessary.

when driving / wedge closed - we slide the movable bed area towards the back including the mattress creating a solid ‘roof’ (these things are staggered) - so the tent material doesnt hang down. the mattress and panels are seperate pieces, it also creates space to store pillows etc. have dustproofed both trucks thou, but that seems like a never ending battle

pic of it open, the bed panels slide 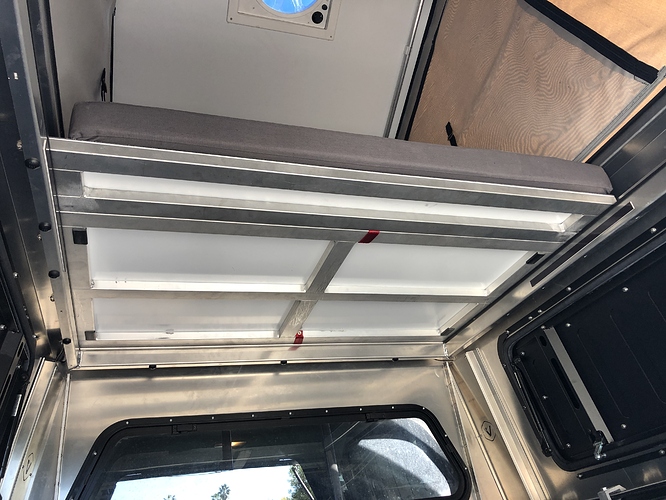 During the prototype stage, using a longer platform was discussed. At that time, one of the negatives that was mentioned by Graeme was that the aft peak height would have to be raised to still allow as much headroom at the front end of the camper, since the angle would be decreased otherwise as the platform was lengthened.

At a minimum, the camper weight would increase, and some design work would need to be done to resize the entire bed section, which would mean some production changes. There’s also a possibility that a longer overhang would also require redesigning the structure to support more weight hanging over the cab.

Maybe they’ll revisit the idea once the Great Hinge Switcharoo has been completed, C19 blows away, and normalcy returns - along with a very tired Mike. The tent has gone through multiple redesigns, with the side entry addressing this somewhat, and GFC has always been open to making changes.